Geng: The Adventure Begins (Malay: Geng: Pengembaraan Bermula, originally Geng: Misteri Hantu Durian) is a Malaysian 3D computer animated film. The film is produced by Les' Copaque and released in Malaysian cinemas beginning 12 February 2009. Geng was launched in a ceremony held on 11 September 2007 together with short animated series Upin & Ipin that have connections with the film. Planning for the film began in late-2005 as Les Copaque commenced operations. It received financial support from ICT-related agencies such as MDEC and MIMOS.

Les' Copaque Production Sdn. Bhd. debut film is entitled "Geng: Pengembaraan Bermula" (Malay for "Geng: The Adventure Begins"). It is Malaysia's first-ever 3D animated feature film, successfully accumulating RM6.3 million in ticket sales in Malaysia alone since airing in cinemas nationwide on February 2009, making it the highest-grossing local film for 7 years since its air date, and dubbing it as a benchmark in the local animation industry.

The story centres around a teenage boy named Badrol, who visits his grandfather Tok Dalang in a village called Kampung Durian Runtuh. But something disturbs the peace there. Villagers tell of a fearsome beast lurking at night but no one dares to find out what it is until Badrol, his friend Lim, Rajoo, and two adorable village twin boys Upin and Ipin stumble upon the very heart of the mystery itself.

Bored with nothing to do for their school holidays, Badrol invites his best friend, Lim to go on a camping trip at his old Kampung where he grew up, with intentions to experience some long-forgotten true Malaysian life in his grandfather's durian orchard. However, their simple holiday trip is cut short by the discovery of a clue that leads them closer to the rumours of the mystery house deep in the forest. Together with their newly found friends, Rajoo, the animal-whispering boy, Ros, the village beauty, and her two cute twin brothers, Upin and Ipin, they work together to unravel the secrets surrounding the small Kampung.

The movie begins with Badrol who is watching the news who is covering news about the sudden disappearance of the durians, a news castor interviews Badrol's grandfather, Tok Dalang about the previous night (a durian fell but something managed to eat it and leave the durians shell completely clean). Tok Dalang and the locals dubs the "something" as a durian ghost since its unknown of who or what is eating the durians late at night. Badrol who is skeptical and wanted to learn if the rumors of the durian ghost is true at the same time visits his grandfather so he decided to invite his city-raised boy friend, Lim to go to the village with him the next day.

After riding on a bus which along the way got its tire punctured forcing the duo to walk to the village which is 5 km away. After a few complains from Lim, a truck driver named Singh noticed the two and decided to give them a ride much to his friend and boss Pak Mail's chagrin. Badrol then tells them about their journey including the story told by Pak-Mail about the abandoned house.

In the village, Upin and Ipin are playing in, Uncle Muthu's outdoor restaurant while Sally is impatiently waiting for her pastries, Mak Uda called Opah by Upin and Ipin's as she is their grandmother arrives the twins greet Opah who tells them to come home with their older sister Kak Ros, Opah then ask Sally to see if she has finish making her clothing and ushers to fix it as Sally tells Opah that she couldn't finish sewing the clothes simply because the buttons keep popping out and is ruining her nails. After Sally complains about Opah, Opah then asks Ah Tong about the news of the durian ghost but Ah Tong claims the durian ghost to be unreal Opah claims Ah Tong that he 'never believes in anything'. Sally leaves as she lost her appetite as Singh and Pak Mail drops Badrol and Lim on the shop the two then decided to ask Uncle Muthu for directions to Tok Dalang's house since Badrol hasn't been in the village for a while and he doesn't remember the way to his house but due to Uncle Muthu's poor directions.

Uncle Muthu decided to ask Upin and Ipin to lead Badrol and Lim instead while Kak Ros drops by to deliver the pastries but decided to follow her brothers as she is forced by Uncle Muthu. Upon arriving at Tok Dalang's (called by Atok) house and having a reunion, Badrol and Lim took Atok's suggestions which is to explore the village, Badrol and Lim then proceeded to have a motorcycle race, knocking out a child named Raju who forces the two to replace his radio (when Raju sees the two heading towards him he jumped into the water with the radio) and his one-brokened horned cow Sapy into the water. Badrol and Lim are telling him that they going home to Tok Dalang's house.

At night, Tok Dalang tells about the Durian Ghost, Badrol and Lim are sleeping but Lim want to go to the bathroom. Tomorrow, they're going to the orchard with Rajoo's wagon. Upin, Ipin and Rajoo are riding a leaf. And they found a fox named Oopet. Kak Ros, Badrol and Lim found them and at night, they go to the camp base. A monster is chasing them and they go to the cave. Tok Dalang, Opah, Uncle Muthu and Uncle Ah Tong is going to the orchard for finding them. The reveal was Oopet is been eating the durians. Oopet tells Rajoo to find his mother. Badrol and Lim are kidnapped by Uncle Singh (disguised as a monster) to the cabin. Rajoo is sneaking to the cabin that Uncle Singh and Pak Mail have some plans for haunting the orchard. They saved Badrol and Lim and they exited the cabin. However, Oopet is helping his mother but Pak Mail catches him, but his mother is attacking Pak Mail and Uncle Singh for wanting to kidnap Oopet. They escaped, but his mother is chasing them. They go to the cave again and Oopet tells them to run while Oopet's mother is fighting the monster.

They say to Oopet goodbye, before finding Upin, Ipin, Badrol, Lim and Rajoo and they discuss that Abang Salleh is inside the cabin to follow Uncle Singh's and Pak Mail's plan.

It took two years, RM 4.7 million and 40 local animators to complete Geng, which director Mohd Nizam Abdul Razak compares as cheap against Western animation budgets worth "around RM15 million to RM40 million" and "about 130 to 150 animators". Les' Copaque Production's Managing Director, Burhanuddin Md Radzi, told that planning the film began when Mohd Nizam, Muhammad Usamah Zaid and Mohd Safwan Abd Karim met him to read out their plan. In terms of cost-saving, he said that the computers were bought from Low Yat Plaza with modifications of their own, besides financial and logistic support from MDEC, Mimos Bhd and MOSTI". Maya and MentalRay were employed as the main 3D animation software. Nizam added that supply from Mimos worth millions of ringgit allowed Les' Copaque to perform rendering in only six to eight months compared to the usual over-one-year period, as well as saving costs. Geng was completed in August 2008 at 108 minutes, and was previewed to invited guests from MDeC, Finas, Mimos, RTM, Media Prima, Astro and the press. It had been shortened to 90 minutes on the advice of Finas to please the cinema operators. Les' Copaque was also busy completing the Upin & Ipin shorts for television which somewhat disrupted post-production of Geng. Les' Copaque prepared five original Geng reels, three of which were sent to Kantana Group in Bangkok, Thailand for audio mixing. On November 2008, Les' Copaque announced the Censorship Board's approval of their film without cuts and permission to screen by Finas. The music for Geng is mainly composed by Yuri Wong, who also composed music for the related animated series Upin & Ipin, along with Mohamed Azfaren Aznam, who contributed music as a second composer.

Les' Copaque has been reported to place targets ranging from RM5 million to RM10 million, and even RM100 million after considering international distribution plans. Geng opened on 12 August 2011 to incredible public response and rave reviews. On its first week in Malaysian cinemas, it gained RM2.3 million at the box office. As of 1 April, it was confirmed that Geng had amassed RM 6,314,526 of ticket sales throughout its seven weeks on Malaysian silver screens, in a rare event in which a Malaysian film has single-handedly defeated an array of major foreign releases, which at that time included Oscar nominees Slumdog Millionaire and The Curious Case of Benjamin Button. 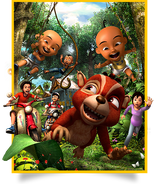 Add a photo to this gallery

Retrieved from "https://upinipin.fandom.com/wiki/Geng:_The_Adventure_Begins?oldid=7415"
Community content is available under CC-BY-SA unless otherwise noted.