Upin is the eponym and main character of the Upin & Ipin series. He is Ipin's twin older brother, Ros' young brother, and Opah's grandson. A cheerful twin boy, he and his friends live in a community of Kampung Durian Runtuh. Upin's full name can be seen in Bijak Sifir episode.

Upin and Ipin are agreeable twin brothers and are both bald-headed. Upin is different from Ipin because of Upin's hair that stands out on his bald head. Upin often wears a yellow tank top that is printed with the letter "U".

Upin talks a lot in the series compared to Ipin. As an older brother, Upin shows leadership to Ipin; he plans and tries to find better ways to do things. When Upin is not being naughty he corrects the mistakes of his brother. Upin and Ipin are rarely far apart, indicating that they need each other. 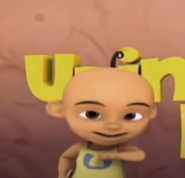 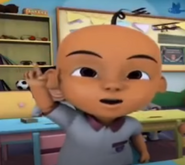 Season 2
Add a photo to this gallery

Retrieved from "https://upinipin.fandom.com/wiki/Upin?oldid=8231"
Community content is available under CC-BY-SA unless otherwise noted.